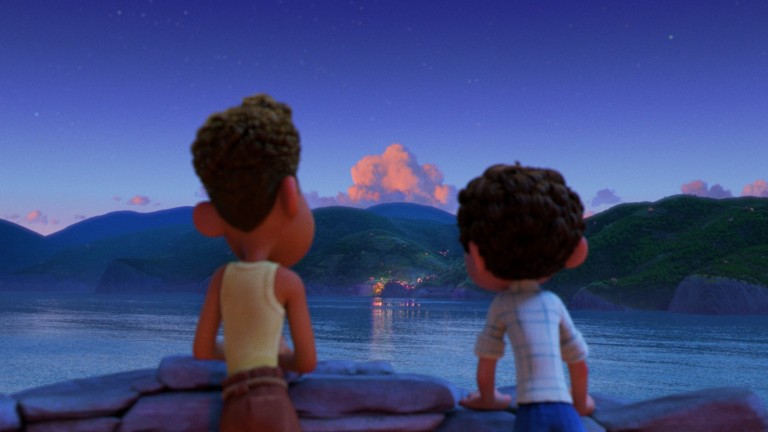 I know I went in-depth with Luca’s character discussion last week, but I couldn’t help it! There was a lot to discuss and characters I didn’t even mention. What can I say? Most of the characters were created well (except a few) and were a delight to see.

This week I want to take a step back from analyzing the characters to focus on the plot and other elements that helped enhance the story. I gave a general synopsis of Luca last week, but there was so much more going on with the story than I mentioned. The plot was simple – in a good way. There wasn’t a larger-than-life villain or storyline that needed to be followed, and it was great. You didn’t have to think too deeply about what would happen or if there would be any betrayals plot-twist villains. Nada. Just two boys are trying to get money to buy a jalopy Vespa so they can explore the world together. The antagonist, Ercole, and his goons were a one-dimensional trio hellbent on maintaining their “superiority” over others because they won a children’s triathlon five years in a row. Honestly, his pride wasn’t much to be proud of because as either a late teen or young adult running against literal children, it’s kind of sad. But it works for the story.

If you were a kid, Ercole perfectly fills the role of the childhood bully. Trying to win prize money to buy a Vespa (even a derelict one) is something you know a child would work toward. Heck, if I were a child in the movie, I’d work toward it. And that’s what makes this movie so good! It’s simple but not basic. It still has a lot of heart in the story, even if it isn’t going on an epic quest to take down the big baddy of the story to restore balance to the world. It was simply two fish out of water (literally) boys trying to live out a childhood fantasy.

Something that also helped enhance the plot and put you in the mindset of wonder and childhood is the music compositions. Each musical score knew what it was doing, manipulating your emotions to feel what the movie wanted you to feel. Were we going to feel the dread of your parents finding out you were doing something behind their backs? You better believe it. We’re going to be amazed and a new concept? Yep, there’s a score for that. This movie and its songs took me back and put me in my childhood. I felt optimistic and viewed the world with fresh eyes by its end. I wanted a Vespa and wanted to go to school too!

The animation in this movie was gorgeous. It drew me into the film, even without hearing a sound. The landscapes, the town, it all felt real. Everything had texture; even skin had hairs animated in making people feel more realistic. The way everything was designed made me feel like it’s summer even though we’re in the dead of winter. The clothing had texture, and I could tell items were knit. It even went into detail to show the tiny fibers that clung to Giulia’s beanie and Ercole’s scarf.

If you haven’t seen this movie already, please give it a watch and see for yourself. You’ll feel like a kid again.